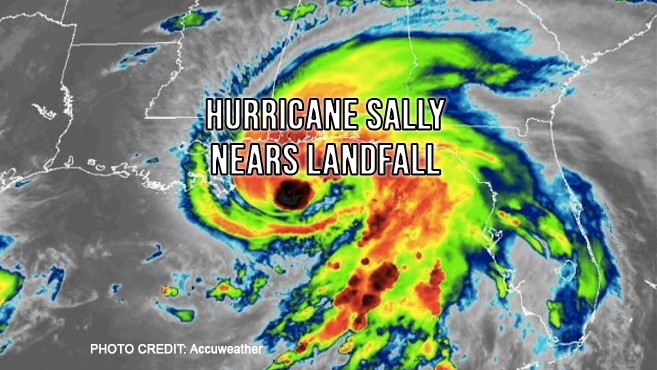 Hurricane Sally continues to creep towards landfall at only 2mph but should remain a Category 1 hurricane at landfall along the central Gulf Coast, probably near the panhandles of Mississippi and Alabama, early Wednesday morning. The storm is already producing a significant storm surge in some places along the coastline and heavy rains are expected to cause widespread flooding.

The National Hurricane Center (NHC) issued a hurricane warning for areas from east of the mouth of the Pearl River (Mississippi/Louisiana border) to Navarre, Florida. The hurricane warning that was in effect for metropolitan New Orleans has been replaced with a tropical storm warning, due to Sally's more eastward track. Widespread wind gusts of 40 to 60 mph are expected from the central Florida Panhandle to eastern Louisiana, with the strongest wind near or east of the anticipated landfall. Forecasters have increased rainfall projections up to 30 inches in some parts of the Gulf Coast. Storm surge of 6-10 feet is anticipated in eastern Louisiana and along coastal portions of Mississippi and Alabama with locally higher levels possible, while storm surge of 1-3 feet extends all the way through the Florida Panhandle.

All residents along the eastern and central Gulf coast should finalize preparations and heed all evacuation orders. The cities of Destin and Fort Walton Beach have declared state of emergencies, along with the states of Louisiana and Alabama, prior to Sally closing in on the region. Mandatory evacuations have been ordered in low-lying areas of Mississippi and Louisiana, including for areas outside of New Orleans levee system. Officials closed Alabama beaches effective at 3:00 p.m. Monday, and recommended evacuations for flood-prone areas south of Interstate 10.